Architect and printmaker Giovanni Battista Piranesi (Mogliano di Mestre, 1720 – Roma, 1778) is considered one of the key figures of European artistic culture in the 18th century. Born in Venice, where he trained as an architect, in the 1740s he moved to Rome. In the Eternal City he began a career in printmaking alongside Giuseppe Vasi, with whom he published the first illustrated guides to the city. Piranesi’s exceptional skill as an engraver was reflected in a series of works focused on Ancient Rome. His prints are noted for redefining framing and perspective, as well as the dramatization of spaces, and for combining the dual forces of archeologic interest and boundless imagination.

Piranesi channelled this interest for Roman antiques in fields that went beyond his engraving skills, managing a profitable commercial enterprise that made him one of the most important antiques dealers in Rome. His workshop produced all kinds of sculptural objects for a clientele comprised mainly by British aristocrats. A relevant example is the white marble and red porphyry chimney-piece that presides this space, featuring an alabaster relief from the 2nd century devoted to the god Bacchus. This piece was commissioned in 1774 by George Grenville-Temple, future first marquess of Buckingham, to decorate Stowe House in Buckinghamshire, England. After a fascinating journey through the centuries and European geography, the piece arrived at Banco Santander in 1959, destined to preside the Board Room of the Bank at its seat in Paseo Pereda.

The Espacio Piranesi is an invitation to immerse ourselves in the work of one of the most multifaceted artists in the History of Art while visiting one of the most representative ensembles of the Banco Santander Collection. 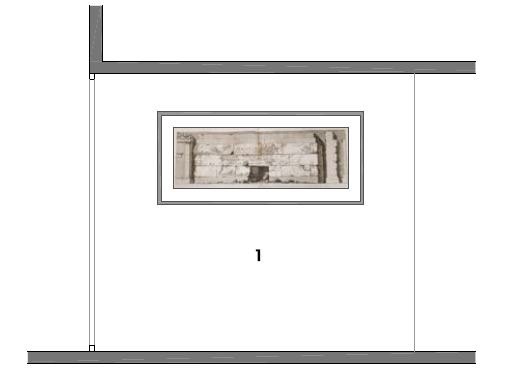 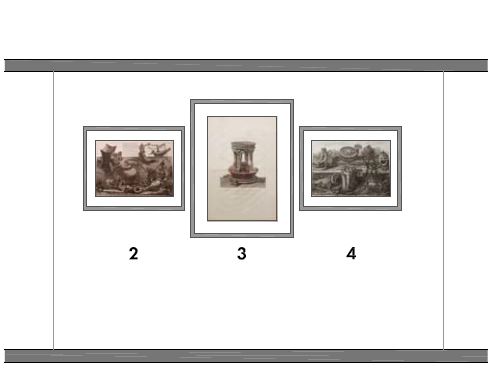 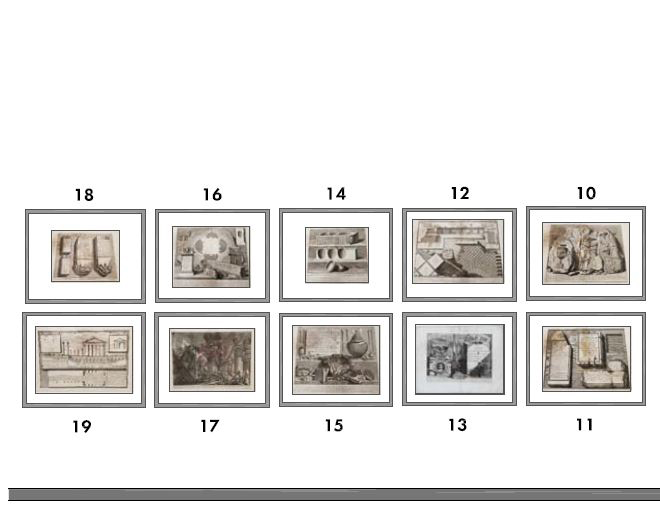 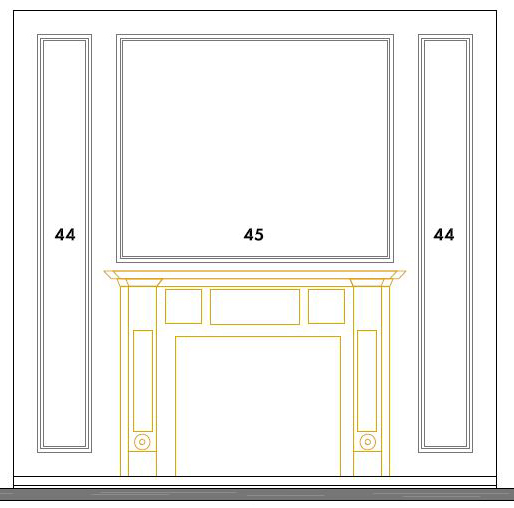 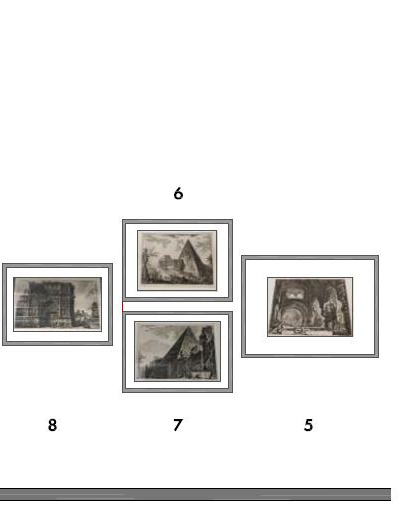 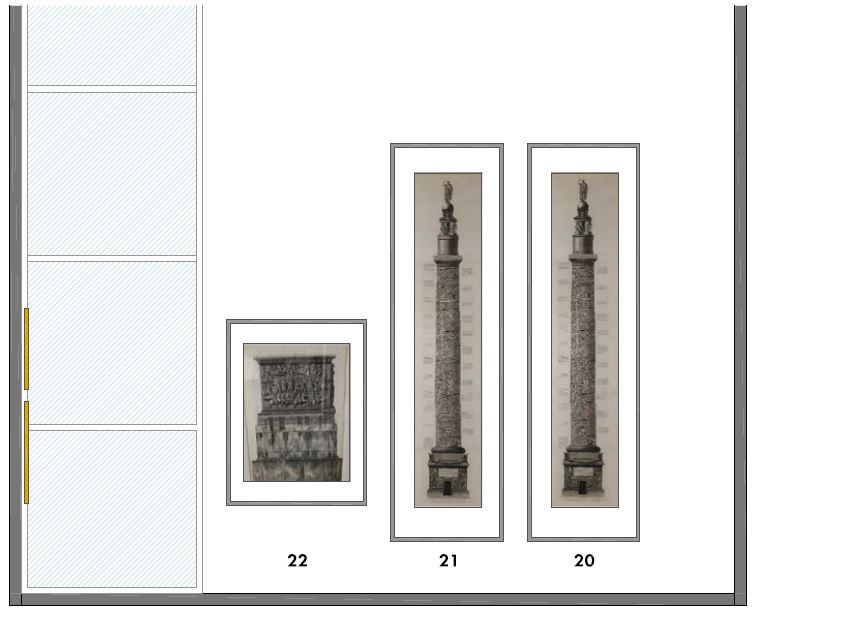 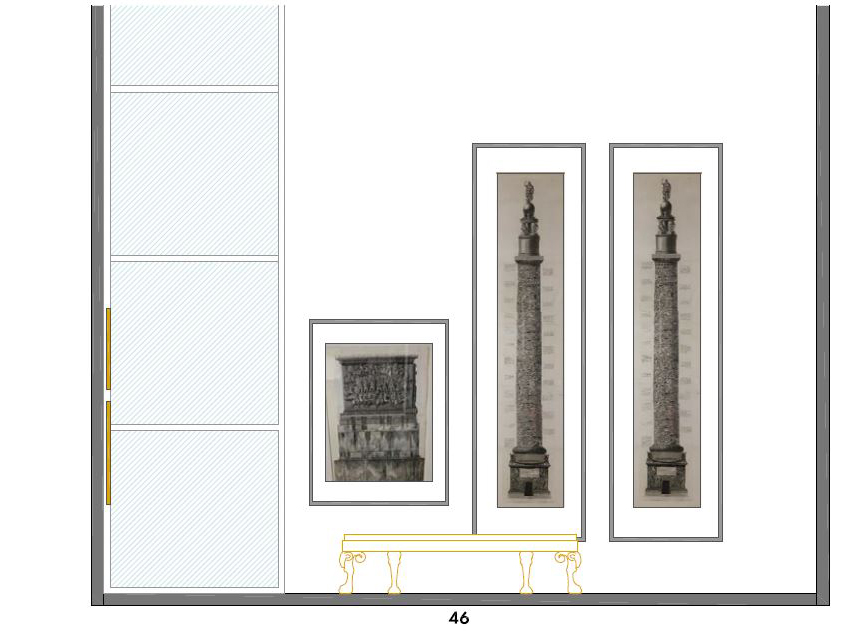 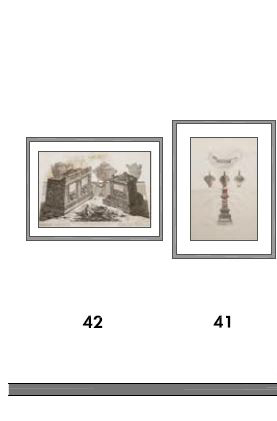 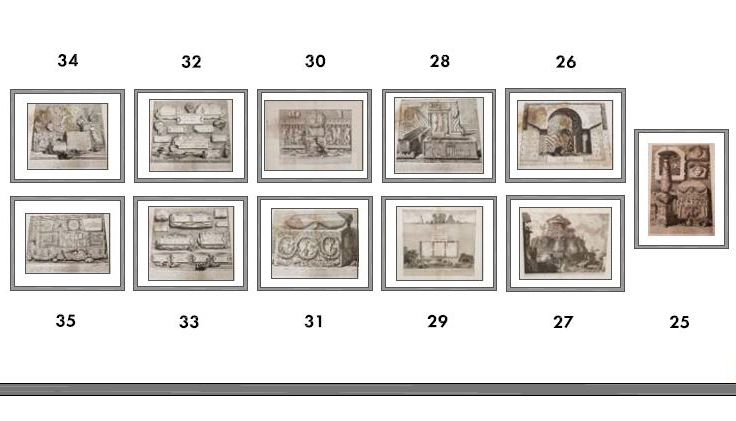 LEARN THE HISTORY INSIDE ESPACIO PIRANESI

This series of views of the monuments of ancient and modern Rome was the key to Piranesi’s commercial success. The prints were destined for Grand Tour travellers, the young European aristocrats who undertook these educational sojourns in the 17th and 18th centuries, but also for architects, artists, and academics. The 135 prints became testimonies of Rome at the time, and had great critical success in the following centuries, becoming iconic images of the city. The four prints exhibited show views of monuments that are still recognizable and can be visited today. The Pyramid of Cestius in Rome (6-7) and the Arch of Trajan in Benevento (8), as well as a reconstruction of the ruins of Mecenas’ Villa at Tivoli (5).

The Campus Martius of Ancient Rome (1762)

This publication was a massive undertaking, an exercise in speculative archaeology for the reconstruction of the monumental zone in the centre of Rome. Piranesi’s boundless imagination, combined with his academic passion for ancient ruins, leads to a series of hypothetical reconstructions, a combination of architectural fantasies with fragments of existing monuments. The work, titled Il Campo Marzio dell’Antica Roma, is dedicated to British architect Robert Adam (1728-1792), who was Piranesi’s disciple during his Grand Tour in Italy between 1755 and 1757. Most of the research carried out by the Italian artist in order to publish this work was done alongside Adam, and is the basis for an artistic relationship that would have important repercussions throughout Europe. Robert Adam returned to London filled with knowledge and concepts of antiquity and architecture that were strongly influenced by Piranesi. When he resumed his practice as an architect this knowledge helped him become one of the principal promoters of the English neoclassical movement, what has been defined as Adam Style.

The only print exhibited from this series (9) has a dedication to Robert Adam in a fragment of architrave seen in the lower left-hand corner of the plate, a testimony to the respect and admiration these two figures of European neoclassicism had for each other.

This publication reflects Piranesi’s erudite passion for Roman antiques and his obsession with preserving their memory. Throughout four volumes, the architect describes and measures in detail a vast inventory of antique Italic, Etruscan and Roman pieces. The complete work is formed of 256 plates distributed in four volumes. In this space we can see 22 engravings, mainly recording fragments of inscriptions, urns and other funerary elements, as well as plans, elevations and views of Roman burial chambers. Of interest are a few archaeological enclaves known in modern day Rome such as the Mausoleum of Augustus (12-13), the Portico of Octavia (19) and the Tomb of the Scipios (27).

The cataloguing of antiques continues in this work devoted to the monumental columns of Trajan (21), Marcus Aurelius (20), and Antoninus Pius (22). The work collects three of the Italian artist’s main interests: Roman engineering and building methods, the representation of ancient monuments in the context of the modern city, and the relationship between architecture and ornament. The Marcus Aurelius and Trajan columns are presented in complete views that include explanations of the reliefs written on the shaft. Piranesi selectively reproduces reliefs from the original columns, choosing the figures and elements that allow him to create a catalogue of ancient images. In the case of Trajan’s Column, Piranesi takes the liberty of reconstructing the original crown, including a recreation of the statue of Trajan that had been substituted in the time of Pope Sixtus V (1585-1590) with a statue of Saint Peter that can still be seen in place today.

Piranesi became one of the most ardent supporters of Roman and Etruscan tradition in academic and theoretical discussions surrounding the prevalence of Greek or Roman culture, a dispute which was at the heart of most aesthetical and artistic debates in the 18th century. In publications such as Della Magnificenza ed Architettura de’ Romani (1761) o Osservazioni di Gio. Battista Piranesi sopra la Lettre de Monsieur Mariette (1765), Piranesi debates with the academics that defended the superiority of Greek classicism.

The five plates shown belong to the second part of Osservazioni, titled Parere su l’architettura, where Piranesi presents his arguments in favour of the Etruscan origins of Roman civilization through a dialogue between two imaginary characters – Didascalo and Protopiro – who assume the roles of defender and detractor respectively of Piranesi’s ideas. These illustrations show the ornamental language championed by the Italian architect, a highly imaginative style, unrelated to convention, which combines motifs from Egyptian, Etruscan and Roman tradition.

Directly related to Piranesi’s activity as an antiques dealer, Vasi, Candelabri, Cippi,… is a catalogue of 122 engravings of pieces produced by the Italian artist’s workshop. This work was posthumously published by his son Francesco, with the intention of promoting and circulating examples of the workshop’s output among European collectors. The illustrations in these plates are accompanied by descriptions of the pieces and dedications to Piranesi’s most important clients and patrons. Most of the objects presented are highly restored antique fragments, integrated in modern compositions suited to the taste of the era. Stand-outs among the plates shown here are funerary urns and other funerary objects, tripods, and different perspectives of a sculpture in the form of a ship, all of them prime examples of Piranesi’s ingenuity and skill as an engraver and art dealer.

The most important piece in this space is the white marble, red porphyry and alabaster chimney-piece (43) designed by Piranesi in 1774. This piece arrived in Santander thanks to the then president of Banco Santander, who purchased it in 1958. Don Emilio Botín Sanz de Sautuola y López is the author of this surprising reunion between Giovanni Battista Piranesi and Robert Adam in Santander in the 20th century. His bust, by Juan de Ávalos, welcomes us into this room devoted to one of the most relevant chapters of artistic patronage undertaken by Banco Santander throughout its history, and which continues with the refurbishment of the seat in Paseo Pereda to open its doors to society.

The hall seats, candlestands and panels that form part of this exhibition are objects created in the 1960s for the institutional wing of Banco Santander at Paseo Pereda. The interior spaces were conceived as a contemporary recreation of the Adam Style, led by Oswin Bateman-Brown, architect and interior designer of the English practice Lenygon & Morant. This modern interpretation of a style pertaining to 18th–century England was tied to the installation of Piranesi’s chimney-piece in the Board Room, the most representative room in the building.

These elements are characterised by being handcrafted in wood, and inspired by the repertoire of classical motifs pertaining to the Adam Style. The hall seats (46) – decorated with ram’s heads and lion’s claws – are a replica of the ones designed by Robert Adam for the entrance hall of Osterley House (England, 1761), whereas the candlestands (47) -decorated with satyr heads, rams and sphynxes – take their inspiration from some of the most characteristic pieces produced by Piranesi’s workshop, some of which can be seen in the engravings displayed here.